While the world is ablaze, a blind director asks her theater group to help her process her broken heart. In a chaotic and iconographic role play, the group embarks on its search for love’s true nature, while the fear of the physical world’s limitations are buried deep underneath the stage floor. 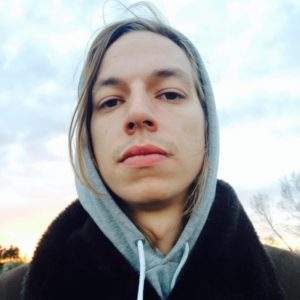 Jesper Dalgaard graduated from the National Danish Film School in 2017 and is an award-winning writer and director who has been in competition and screened at IFFR, SXSW, Nordisk Panorama and OFF, where his film Übermensch won Best Danish Short Film in 2017. He has received a Special Mention two years in a row at Sheffield Doc/Fest and his graduation film Weltschmerz won a Danish Academy Award. His work has been ‘Staff Picked’ by Vimeo, Premiered at Nowness and ‘Short of the week’. Working in the field of merging theater, documentary, and fiction, he often creates characters and aesthetics with a bleeding love for mythology and the dark horses of society.