‘Tribe of Ghosts’ is a documentary that takes place within a government-run shelter; here we see how children with albinism live alongside children with visual and auditory problems. We follow a group of children with albinism on their daily rituals as they struggle with their burden and we witness their fragile childhood. Armed guards watch over the children 24 hours a day, 7 days a week. The children with albinism cannot leave the shelter because they are likely to be subjected to torture and ill-treatment or worse death. In this documentary we will observe the innocence of these young children and learn about the consequences of these superstitions. Will they ever be free of their oppressors or does the cycle of pain continue in the land of the supernatural? 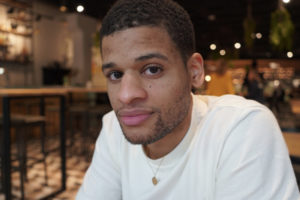 Almicheal Fraay is a filmmaker and visual artist based in the Netherlands. His films have a documentary focus on exposing underexposed stories. Recurrent themes are injustice, minorities and social issues. Almicheal completed his bachelor in film at The school of Fine Arts and Design St. Joost in 2018. He just finished his S16mm graduation film, Tribe of Ghost, a short documentary about children with albinism in Tanzania, which he directed and shot.