Earth has been abandoned long time now and the human race has found refuge in outer space. Three archeologists return to Earth to investigate where a mysterious five tone signal is coming from… 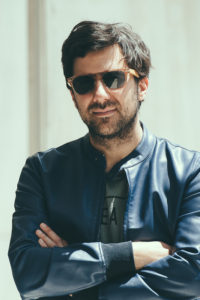 Yorgos Zois was born in Athens in 1982. He studied applied Math & Nuclear Physics at the NTUA and as well as Film Direction at the Stavrakou Film School, Athens and at the UdK Berlin (with scholarship by Costa Gavras). His debut short film Casus Belli premiered at the 67th Venice IFF in 2010, competing at over one hundred international film festivals and winning over twenty five film awards. In Greece it won the 2011 best short film award from the Greek Film Academy and six awards at the Greek National Drama Short Film Festival including best film, best director and best script. It was the first Greek short film that secured distribution in Europe and was broadcasted by many TV stations all around the world (CNC, ARTE, NBC, SBS etc). His second short film Out of Frame premiered at the 69th Venice Film Festival in 2012 and won the EFA award for Best European short film. In 2012 Zois received a nomination for best European film director from the European Film Academy. His first feature film Interruption made its world wide premiere at the 72th international Venice Film Festival. He has also produced two highly successful international short films by Konstatina Kotzamani, Washingtonia and Yellow Fieber. Based in Athens, Zois is currently involved in new projects around the world.