A forest hermit tries to prepare for a flood, but he becomes distracted by his noisy neighbour, who happens to be the hermit’s left eye. What follows is a meditation on worry, and the potential consequences of obsession.

The Flood is Coming explores the growing anxiety about the state of nature, and our place in it. While also considering how people can appear to blindly seek conflict as they approach adversity. 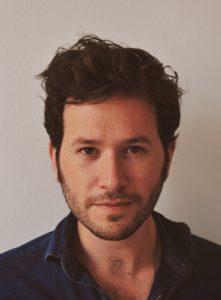 Gabriel Böhmer, originally from Zurich, is a London based artist interested in memory, dreams, and the absurd. Gabriel’s films have been selected at international film festivals, including Clermont-Ferrand, IndieLisboa, and Message to Man. Gabriel’s art has been exhibited at the Edinburgh Gallery, the Hampton Court Palace Flower Show, and in Dezeen magazine. His film Beetle Trouble was awarded a Special Jury Mention at Clermont-Ferrand.