How does the recent discovery that a fertility doctor has secretly used his own seed impact the lives of two mothers and their donor offspring? How does a mother deal with a now-deceased doctor, who turns out to be the father of your child? How do these news influence the children’s sense of identity? Does this knowledge change the relationship between mother and child? In a recreated clinic, the past is brought back to life, as two mothers and two children speak candidly about how they deal with this new reality and with each other. A short documentary on the visible repercussions of an ill-conceived donor system, investigating the emotional heritage of the fertility doctor Jan Karbaat. 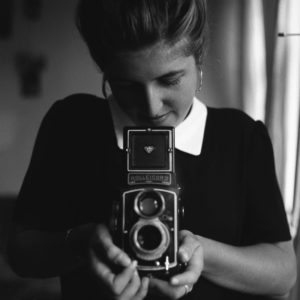 Miriam Guttmann tries to address and show the human and relatable aspects of subjects that others may perceive as ‘difficult’ or taboo. As Miriam has a sincere curiosity in people, she has been able to document many interesting stories, such as that of a mortician, war refugees, orphans, and young women speaking openly about the difficulty of sexual climaxing. Her work distinguishes itself through its daring content, which she seeks to display with an unbiased openness, empathy and respect. Guttmann has a strong background in photography and has collaborated with prominent photographers such as Billy und Hells and Jimmy Nelson. Her work has widely been recognized and published in newspapers and magazines including NRC, TROUW, New Gup Magazine, and SOTOKOTO Magazine (Japan). Her work was exhibited at Photography Museum FOAM in Amsterdam, Photo Festival Naarden, Corrosia Almere, and the Double Tree Hilton Hotel Amsterdam. Miriam graduated from the Royal Netherlands Film Academy in 2018. For her highly acclaimed graduation film, Seeds of Deceit, she won the award for “Best Documentary of 2018” (VPRO).