A documentary from within and about the struggle in Beirut this past summer, which was sparked by the garbage crisis, leading to a series of demonstrations, actions that reached new levels of consciousness. This is a diary of the evolution of the demonstrations, their themes, their chants, their spirit, as well as a personal account of the struggle.

Initiallly made as a means of propaganda to mobilize people, “Reverse-Shot: Diary of a Struggle” was a 16 minute film edited from material shot during the first two weeks of the struggle, and posted openly online for comrades in the struggle and others to watch and share.

As the struggle evolved and died, the film took on another form including the 16mm footage of the final demonstrations around that cause. It has screened at the Lebanese Film Festival, the Avant-Edge Film Festival in Chicago, the 10th International Kuala Lumpur Eco Film Festival, was part of the official selection of the The TMC London Film Fest, and Roma Cine Doc and now at Leiden International Short Film Experience ! 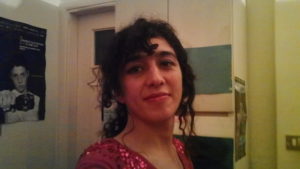 May Kassem is a Lebanese filmmaker, screenwriter and teacher, who has made 16mm films, videos, documentaries, and animated films. Her work has focused on the impact of art on society (Organized Freedom is Compulsory – 1994 / Pre-revolutionary art is the Art of the Revolution – 1996), as well as the marginalization of segments of urban populations such as migrant Syrian construction workers in Lebanon (Joker -1998), and the plight of undocumented immigrants in Paris (Qui écrira l’histoire – 1996). May also works in radio presenting world music, electronic music programs – and has made film portraits of her colleagues at the radio « 96.2.1 »& « 96.2.2 ».

In 2016, May completed both “Reverse-Shot: Diary of a Struggle” as well as a feature documentary based on the life of actress and singer Nourhane who was active in the 1940s, 50s, and 60s, who had suddenly quit the stage at the height of her career, and who is her grandmother .
“Nourhane, a child’s dream” has won many prizes and screened in Lyon, Tunis, Martinique,Sidney, and many places in between.

In the Spring of 2017, May Kassem completed “Free Waves”, a feature documentary around the struggle for the preservation of the public beach in Beirut, the end of radio transmission through electromagnetic waves, and the earth’s fragile place in the cosmos – which has started touring the planet.

She is currently finalizing the sound mix on her first feature film « Winter Ballad » which she wrote, directed, acted in, and edited….and is in parallel working on a documentary trilogy on cities, their public spaces, their history of struggle, migration, frontiers, barriers, both physical and political, with an apocalyptic and poetic twist.

May lives in Beirut, for the time being.