November 2017: the Italian national football team does not qualify for the 2018 World Championship. There are people who can’t live without having their national team to support; they hang around in the squares, feeling useless and purposeless. In the deep South of Italy, a group of them do not give up and decide to set up a parallel world championship to be played right in their hometown square. Italy will compete against other national teams made by immigrants. But some of them were born and raised in Italy and they feel 100% Italian. So, what? There’s only one solution: two Italian teams will play against each other. And we will see who wins. 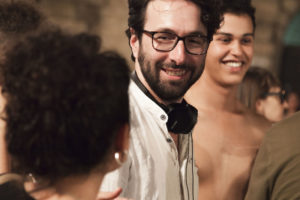 Vito Palmieri, from Italy, studied Cinema at the University of Bologna, where he graduated in Filmology in 2004. In 2006, he was acknowledged with more than 50 awards from critics and audiences for his short film Tana Libera Tutti (Everyone Saved, 2006), only played by children. This short film was funded by the Italian Ministry of Heritage and Culture and was nominated for a David di Donatello award. In November 2012 Vito directed Matilde, a short film produced by Agfa (Association of Parents of deaf children), presented in Berlinale 2013, in the category “Generation Kplus”. At TIFF (Toronto International Film Festival) in the “kids” category, Matilde won the best live-action short film award.