A mousetrap snaps shut, a market place awakens. A group of men heatedly discuss how to kill the animal in the little box. One after the other, they try to trump each other’s sadistic fantasies, and even a stranger’s suggestion to let the creature loose, turns out to be a sick manipulation. But as the macabre game unfolds and spirals out of control, both victim and tormentor suffer the same fate. 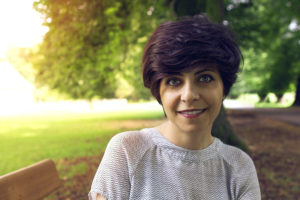 Shadi Adib was born in Tehran. Her passion for drawing led her to a B.D. as graphic designer from Tehran’s Fine Art Faculty and her MA as animation director. After that, she worked in Tehran as a concept designer and animator, until she moved to Germany to study at the Animationsinstitut der Filmakademie Baden-Württemberg. Already at the beginning of her lateral entry program, her initial project Filmfabrik was chosen to be the ITFS Trailer for 2015. Alongside further contributions in third-party projects like Ich kenne ein Tier, Shadi developed and animated two films for the Haus der Geschichte Stuttgart as part of the 150th birthday of Carl Lämmle, which were presented until summer 2017 as part of the exhibition. The Ad, one of the two films which were produced for the event, was running as part of the Filmschau Baden-Württemberg, and earned very positive responses. In Tehran she worked on her shortfilm Like a Dream (“Best Film” 4th Tehran Urban Film Festival) and on the award-winning short Alzheimer (“Golden Prize for the best animation” 8th Tehran Animation Festival) as screenwriter, concept artist, and animator. She completed her work on her latest short Fuse in 2017. The film was drawn entirely on paper and features among others Nick Cave as one of the main voice actors.