Through orality, the act of telling and re-telling stories, cyclical and non-finite time presents itself. The act of imagining unfolds in front of us. And even if we can’t see, the world is created anew. Day after day in front our eyes. Invisible. In the stone, the engraving crystallizes the historical time. Visible. There, for us to see with the naked eye. Resisting the passage of time and memory. Side by side we see images of the immaterial and material in the world, in pixel and in celluloid. 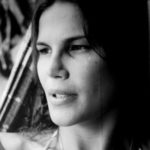 Luciana Mazeto and Vinícius Lopes studied cinema at PUCRS in Porto Alegre, southern Brazil. They directed and wrote several short films, which were screened at national and international film festivals. They are the founding partners of Pátio Vazio. In 2016, they produced the Cine Esquema Novo film festival in Porto Alegre, as well as curating a 16mm parallel program focused on two major artists’ film labs in Europe. In 2017, they directed their first feature film, Sister, currently in post-production. Antes Do Lembrar is his most recent work.