The woman-body versus the tractor-city: an architectural and symbolic erasure. A desmemorization. In the midst of brazilian’s biggest political crisis, Afeto is an experimental short-film about architecture, Brazil’s historical memory and female occupation of the urban space. Besides performances, the film uses archive images of majors public architecture projects and openings in the brazilian metropolis over a half century , questioning the impartiality in urban planning and the social role of women in cities’s construction. The narrative merge sci-fi, thriller and documentary language to talk about a ghost-city where denouncing memory is the first step to recreate it. 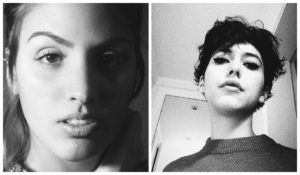 Gabriela Gaia Meirelles is a young director, who graduated in Cinema at PUC-RIO. She already won two prizes of best script at the ROTEIRO PUC contest, in 2014 and 2015, respectively. She directed the short-film Pleased to meet you, Gabriela (2017), winner of best experimental short-film’s prize at Latin America Student’s Film Fest – UFMT; participated on METRÔ, the Student Film Festival of Curitiba, and was screened at X FILM FEMMES Festival, in Berlin (2018). From 2016 to 2018, she worked in the the Screenwriters team of one of major’s film production company in Brazil, Conspiração Filmes.

Tainá Medina is an actress and performer that has started two years ago researching and co-directing Afeto. She worked as an actress on feature films such as The Joy (2010), directed by Felipe Bragança and Marina Meliande, and Anna (2018) directed by Heitor Dhalia, among others. She also belongs to an independent theater group called Teatro de Afeto as an actress, author and director in it. She made an independent short-film called Waltz, screened at X FILM FEMMES Festival, in Berlin (2018). Afeto is her first film as a director in audiovisual.