As a young boy, Jeannot was a little fiery Parisian. In 1871, he dreamt to change the world with the partisans of Paris Commune. But with its repression, he is brought to a journey around the globe. A journey that lasts all his life. 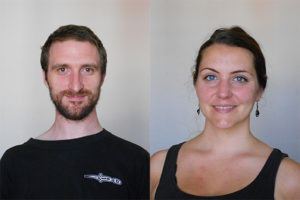 Nicolas Bianco-Levrin and Julie Rembauville are prolific animation film­makers and children’s book authors who have worked together regularly since 2003. They have co-directed 27 short films using various techniques (stop-motion, paper cut-out and drawings). These include Baptistin l’imbattable (2006), Ailleurs (2008), [R] (2010) and Ben Hora (2010), It’s a dog’s life (2012), Minoule (2014), all of which made their mark at several international festivals. In 2006, their book La rue et le machino and companion film Le machino won the Encre et sels d’argent award for graphic design in the book-DVD category from France’s Centre international d’études en littérature jeunesse (CIELJ). They are currently developing a new film based on Bianco-Levrin’s book series Kroak. It’s a Dog’s Life is the duo’s first collaboration with the NFB, and was co-produced with Folimage after winning the SACD short film project award at the 2010 Annecy International Animation Festival.